How I Helped My Parent Move to a Retirement Living Community 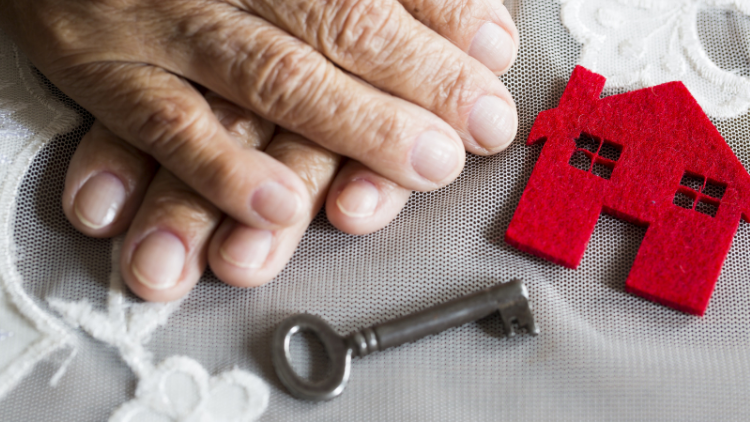 When Sue’s mother, resident Joan M., first told her she was thinking about moving to a retirement living community, Sue was reluctant. In fact, at first, she even discouraged it.

“I was worried about her adjusting to a new environment. I thought it would be hard,” Sue said.

A mere two months after the move to Lake Forest Place, though, Sue reported that her mother was settled and happy, and said that she herself could not think of anything that didn’t go smoothly during the move to the Lake Forest retirement living community.

Here’s how Sue helped her mother manage the transition to a retirement living community, with help from the staff at Lake Forest Place.

Deciding to Move to a Retirement Community

Sue’s mother was living in a two-story house in the Chicago area prior to her move. Joan’s husband had passed away and she was living alone, with some outside hired help.

She was beginning to feel like the maintenance of the house was becoming increasingly difficult.

Joan, described by her daughter as an easy-going, friendly person, was also feeling like her social life had become more limited. Joan liked the idea of community-style living, where she could enjoy the many things offered right outside her front door and the opportunities to meet new people.

The challenges of home ownership combined with the desire to forge new friendships led Joan to consider a move to a retirement living community.

“I actually discouraged her from leaving the house. I said ‘you don’t have to leave the house, you have Brenda [a visiting home aide] there to help,’” Sue said.

When Joan explained her reasons for moving, though, Sue changed her mind.

“Once she said that’s what she wanted to do, I said ‘okay, we’re going to figure this out together,’” she said.

How to Help Your Parent Find the Perfect Senior Living Community

Moving to a Senior Living Community: How to Ease the Transition

Although they considered other communities, the mother-daughter duo soon settled on Lake Forest Place. Joan wanted to stay in the area close to her current doctors so she could be driven to appointments. With a Lake Forest, Illinois location, Joan was in a good position to remain close to everything important to her.

They were also familiar with the community due to Joan’s husband (Sue’s father) receiving nursing care at the Lake Forest Place Balmoral Care Center, where they felt he received quality care. From her husband’s time there, Joan remained taken with the idea of a faith-based retirement community.

However, with the help of Lake Forest Place staff and a senior move manager, the move went seamlessly. Here’s what Sue remembers of the moving process—one that is fairly similar for all residents moving to Lake Forest Place for independent living:

Make It Your Own: Customization Options at Lake Forest Place

The Emotional Side of Moving

Of course, even with a seamless moving experience, it’s still an emotional process.

“When she first arrived, it was hard. I thought, ‘oh, this is going to take a while for her to feel comfortable,’” Sue said. “There was an adjustment period initially because she had been in her house for 65 plus years. So she was sad about leaving home.”

This is a common feeling for seniors who downsize, as Dr. David Mischoulon, director of the Depression Clinical and Research Program at Massachusetts General Hospital, says.

“Letting go of your home and your belongings can feel like you're letting go of a particular part of your life. There's a realization that you can't get the past back,” he says.

Dr. Mischoulon has some tips for coping, including:

Engaging with the new community is certainly something Joan has done. She goes to exercise programs 3-4 times a week, goes to parties and social events, and attends lectures and talks.

“That was actually one thing that led her to want to move in. When she was there with my dad, they would go to the programs and she found them stimulating and interesting,” Sue said. “At Lake Forest Place, they have many great programs that cover a wide variety of topics.”

Getting involved helped. Just two months after the move, Sue reports that her mother was fully engaged and settled in.

“I am very happy with it, despite my initial reluctance,” Sue said.

It Was Time: My Parent’s Move to a Senior Living Community

Peace of Mind for Mother and Daughter

One of the best parts of her mother living at Lake Forest Place, Sue says, is the peace of mind it brings.

“I was gone last week to visit my daughter in college. It was nice because I knew Mom had things to do and she was watched over. I didn’t have to worry about her while I was out of town,” she said. 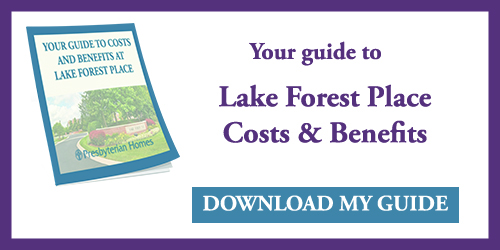 Sign Up for the Latest News, Updates, Tips, and Advice